Briefing As the first touchpoint for Nestlé for more than 15 years in Switzerland, Boost Group was asked to convey the Nespresso brand to customers via point-of-sale (POS) promotions. Boost needed to install temporary merchandising material following the Nespresso corporate identity within a few days, while guaranteeing highest visibility and maintaining good relations with representatives […]

All I need is a moment of pleasure

Briefing Building on its successful launch of the German cult brand ‘all I need.’ in Austria, Capri-Sun is further upgrading its health-based beverage strategy by expanding this range into Switzerland. The company asked Boost Group to develop and execute a creative and effective sampling campaign targeting Swiss commuters. Solution Boost Group implemented an amazing sampling […]

Briefing Barilla wanted to create a sales-oriented “Italian Love Story” campaign focused on emotion and on POS material. Solution We proposed a roadshow and a lottery. On an Italian Vespa customers are invited to share and tell their personal Italian love story. Images of the promotion were uploaded directly to a portal and the winners […]

Nestlé and Coop –”Everything for your fondue” 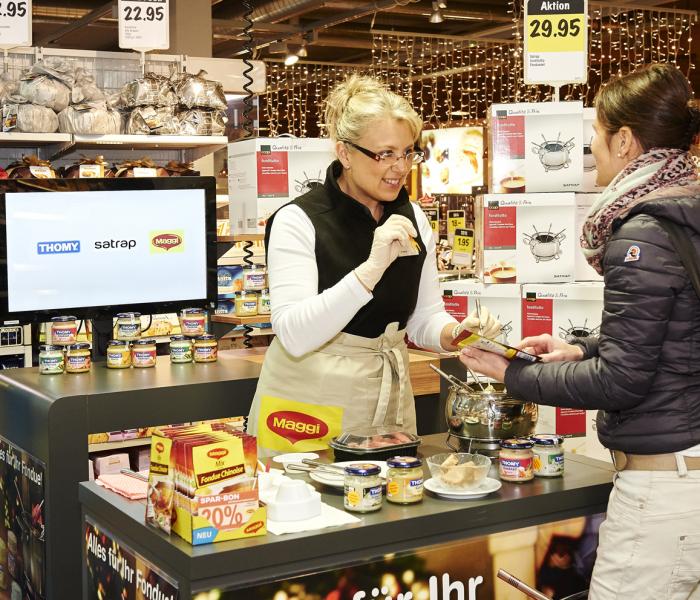 Briefing Shortly before Christmas Boost Group implemented – on behalf of Nestlé and Coop – a cross-category promotion featuring the brands Thomy, Maggi and Satrap on the theme of “Everything for your fondue”. The promotion stylishly brought together a demonstration of the chinoise set with the tasting of Maggi bouillon’s and Thomy’s chinoise sauces, and […]

Briefing The brand new product fusetea was launched on the Swiss market and needed to be presented to a very wide targetgroup. The product focusses on young, health-conscious consumers. Our client, Coca-Cola, combines the use of classic ATL advertising in this campaign with the direct effect of below-the-line activations. Solution Young&Urban is the innovation in […]

Briefing Orell Füssli Thalia (OFT) is the largest chain of bookstores on the Swiss market. In the development of supplementary sales channels to the company’s online and bricks-and-mortar outlets, the focus is on high-footfall sales areas, whose professional and consistent management is regarded by OFT as a decisive success factor. For this purpose OFT looked […]

Nescafé Dolce Gusto: The art of starting the day better

Briefing The Village booth of Old El Paso forms a small oasis for Swiss customers. The remarkable stand is truly a treat for the eye in every branch. How are the customers to be activated? Solution The feeling of a holiday to Mexico, inspires consumers and thereby generates impulse purchases and strong turnover. The scent […]

Briefing The challenge presented by Energizer was the restructuring of its entire range of batteries at 750 branches operated by a wide range of retailers, for the purpose of designing the POS for consumers in a simpler, better organised and more appealing way, while at the same time generating impulse purchases which would boost turnover. […]

We boost customer loyalty and engagement in sustainable, innovative and impactful ways.